I wanted to get a blog post up before the PAX adrenaline has left my system. It’s been a little over a day since we got back from our trip to Seattle and I’m still feeling the rush (although a little thin after my first day back into the workforce).

For those of you who have been following, Stumpt made it to the 2015 PAX Prime convention. It was a very close call. There were times where we sincerely doubted our chances of going and announced our unfortunate luck on one or two occasions. We, however, made it! Price had obtained a 4 day pass through his friends with Bitch Team Alpha (BTA) and the rest of the Stumpt crew scored reclaimed passes at the last minute.

As this was our first convention, we were not prepared for the overwhelming amount of people and extravagant show room that PAX had to offer. It immediately struck us how little we had prepared for and how much there was to see. After leaving Seattle, we were all in agreement (Ash, Rik, and myself) that you truly need all four days to see almost everything. I say almost because, in all honestly, there is no way you can truly do everything.

Friday was our first day on the PAX Floor. We got to meet the fantastic people at Boneloaf (Gang Beasts) showcasing at the DoubleFine booth. It was great to finally shake hands (hugs in this case) with Jon and James Brown and congratulate them on their fantastic game.  We met up with Kyler Kelly and Richard Atlas over at the Clever Endeavour booth (Ultimate Chicken Horse) and swooned over the new Single Player mode. Both Price and Rik walked away with their respective animal shirts.

Saturday was the Stumpt Fan Meetup over at Gameworks, across the street from the convention center. We were blown away by the amount of people that showed up to see us. We had a blast playing games with everyone that attended our little shindig. Kyler Kelly of Clever Endeavour surprised us with a visit and gave out keys so that everyone that came could play Ultimate Chicken Horse at home. Ash and Rik figured out how to game a system for tickets that we traded in so that everybody had something to take home with them.

Sunday was our last day at PAX for Ash, Rik, and myself and we wanted to make the most of it. We visited as many booths as we could and demoed a few hidden gems that we wish had more time to play. Price and Rik got a chance to put on an Occulus Rift and try out Playful’s new title, Lucky’s Tale. Meanwhile, Ash and myself wandered over and demoed out Runic Game’s newly announced Hob. I was blown away when I discovered that Hob was only just announced a week prior with such a beautifully polished demo. Later that day, we met up with Kakujo and we shared our experience on the PAX floor.

We ended the night at the DoubleFine afterparty over at the Hard Rock Cafe and had what was the best night of our YouTube lives. We got to experience a full 8 player Gang Beasts on stage in front of a big screen while Doseone played live music. We admired the fantastic Gang Beasts cosplay, got to chat with Jon and James, awkwardly rubbed elbows with Tim Schafer, and overly fangirled about Gang Beasts. 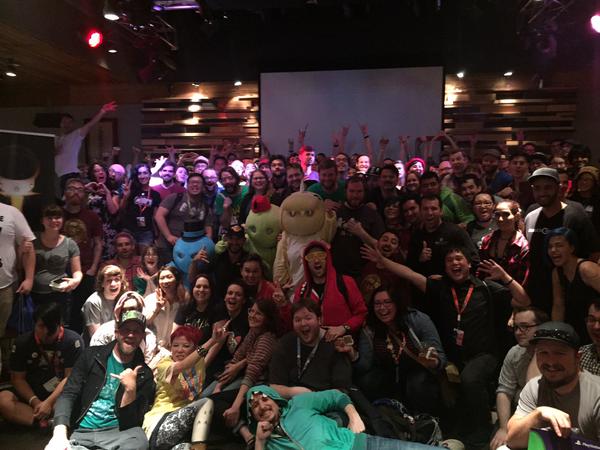 Now that everyone is back in Portland,we’re all dreaming about the next convention in the coming year. Planning out how and where to go, what to see and do. We’ve been bitten by the con bug and hope to travel to a city near you. Thank you for those who were able to come out and see us in Seattle. We truly appreciate your support and hope you had as much fun as we did.

There are big things planned for Stumpt in the coming year and we hope that you’ll continue to be a part of it. We truly could not have done it without you guys and appreciate all of the support that you have shown us! Thank you from the bottom of all of our hearts.

Here is a short list of our favorite games that we saw and played at PAX.

Moon Hunters is a 1-4 player RPG about building your hero’s story. Set in ancient Mesopotamian world that’s different with each playthrough, your goal is to discover what has happened to the missing moon, exploring your personality and building a reputation that persists as legend in each play through. It was successfully Kickstarted on September 26, 2014 and will be available on Playstation 4.

Shoot Shoot Mega Pack is a very minimal looking 2d shooter that is up to four players (think Hokra from PS4 Sportsfriends). The demo included four preset games and a wild variety of player titles, each game made you think of your toes before the other person, last triangle standing wins.

If you like Castle Crashers, then this is their Viking cousin. Viking Squad is a lane-based sidescrolling brawler that is 1-3 players where you fight your way out of the tyrannical rule of the village Jarl.  Lots of unique enemies, weapons, treasure, and old gods quickly made it to our favorite list.

Below by Capybara Games:

Not much is known about Below. It is a procedural world adventure game based on exploring the depths of a remote island. The goal of the game is contingent upon the character’s survival.

How can you not love a game with adorable pugs sniffing each others butts! Butt Sniffing Pugs is a pug simulator that gives you the ability to sniff butts, poop, and be a dog. What made the demo fun was the giant tennis trackball controller and stuffed pug butt that let us explore what life is like being a pug.

Playsets by The Playsets Team:

If you are like Ash and you like virtual maps, miniatures, and table-top playsets then you’ll love this game. Playsets is a free virtual table-top game that allows you to create beautiful real time custom campaign maps in minutes. There are hundreds of heroes, monsters, props, and traps that you can drag and drop onto either custom or pre-built maps.